London is probably THE most vegan friendly city in Europe (in a very close competition with Berlin) and it would take weeks or months to eat through the whole city, so I decided to split London up in different sections, beginning with my favorite part of the British capital: Camden! The beautiful Regents Canal in [...]

Can traveling be sustainable? And how can we reduce our carbon footprints and do our traveling much more responsible? Well, first of all, we all know that traveling by airplane is causing a lot of carbon emission and short trips by air should be avoided as much as possible. I always plan my trip for [...]

or any volcanoes in that matter. When in Guatemala, or Central America, one thing you must do (in my opinion) is to trek a volcano. Its a fun activity and I guarantee you that you will get an experience for life. In Guatemala you can trek three different volcanos: Pacaya (the easy one and probably [...]

Guatemala has long been a 'must-go' destination for me, so when I knew that I would be spending some months in Mexico, I just needed to stop by this beautiful and colorful Central American country. Guatemala is for everyone: the adventurous, the nature lover, the culture and history lover and the foodie. I must admit [...]

Probiotics are beneficial organism, most which are mostly found in the healthy gastrointestinal tract. The probiotics are also called the 'good' or the 'healthy' bacterias because they help restore the natural balance in the guts and overall benefit the digestive system. They are usually added to yoghurts or taken as food supplements. Especially when traveling [...]

I have been traveling around South Mexico for a month now and came across many beautiful places, but none of them have blew me away as much as Magical Mazunte. When I first set off through my travel to Mexico, I have never heard about Mazunte. Thanks to a couple of people that I have [...]

Palm oil is a vegetable oil derived from the reddish pulp of the palm fruit from a plant native to West and South West Africa, but also in several Asian countries such as Sri Lanka, Malaysia and Indonesia (Sumatra). It is use worldwide in foods such as chips, cakes, peanut butter and Oreos, because it [...]

I knew that Mexico City had some vegan eateries, but I didn't knew that the capital of Mexico is booming with vegan food - EVERYWHERE! My only regret of visiting this exciting and diverse capital is that I only spend three days here. Not enough in my opinion. Three days is enough to see the [...]

Mexican street foods are fast, cheap, fresh and packed with flavor! You could easily spend weeks exploring the different regions of Mexico and their specialties and never get to try it all. Plus, why sit down at a restaurant when you could be wandering, sightseeing and meeting locals while you feast? Even though Mexico is [...]

Distrito Vegano is a truly hidden gem in the colorful streets of Mérida and what started with a recipe development for a carrot dog ended in a 100% plant based food truck serving some of the most delicious vegan food I have tried yet. Nik and Mike, a Mexi-American couple owns Distrito Vegano and while [...] 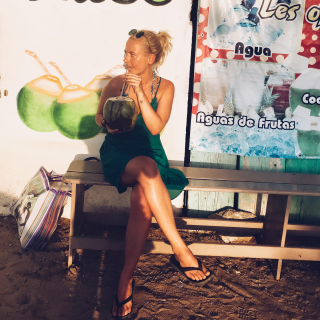 Welcome! My name is Katia and I'm a vegan foodie based in Copenhagen. With my love for vegan food and travels I started this blog. Here I share all my favourite vegan food spots, my travels, recipes and general thoughts on this and that. Stay tuned for delicious food and lots of good stuff.